On my bucket list, there was Ennio Morricone’s concert. Unfortunately, last time he was in Poland, I was not able to see it but this time I couldn’t miss the chance. I was completely moved when almost ten thousand people at Tauron Arena Krakow gave him standing ovation just because he appeared at the stage. How great and talented one person may be to gain such an honor…

Before the concert, maestro decided that memory of the assassinated mayor of Gdańsk – Paweł Adamowicz should be honored. It was really touching when a world-famous composer showed solidarity with us, Polish people. Then, the first sounds of „Les Intouchables” were heard. The concert lasted almost three hours. When I saw maestro after it, he was not tired at all. I am delighted and moved at the same time that I could participate in such a beautiful music event. It is hard for me to choose one piece which touched my soul and heart the most. I decided to focus on these pieces which made me to be emotionally turbulent.

This was a piece which was very calm, mainly bowed and it introduced me into a very melancholic mood. The moment I felt really into this idyllic melody, suddenly everything began to move faster till the time of a sudden slowing down. I got the feeling that this was the end of that song, however a sudden sound of trumpet started the piece all over again. Drums clicked metronome and the melody gained a new energy. It was hard not to dance. I closed my eyes and imagined that each instrument painted their own paths using the same theme. Suddenly the whole performance was muted and everything came back to the beginning. I was able to return to that melancholic land and stay there till the last bars. 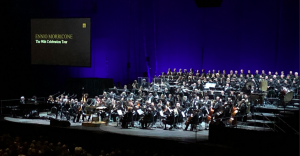 The Ecstasy Of Gold

The Ecstasy of Gold is another maestro’s piece which is known all around the world. When Susanna Rigacci (a soprano) appeared at the stage, she took over it immediately. Her flourishes were strong and trilling, however she reached the highest notes with lightness and grace. A phenomenal choir accompanied her and choristers coped with the score perfectly. Suzanna’s voice gave me goose bumps. This performance will be long remembered.

I was completely shocked by a new version of Abolisson (however it is not as new as I thought). How it is possible that I have not heard it before? I must admit that a refreshed version of Abolisson gained a lot. First of all, there was an amazing energy in it. Despite easy melody, the choir did its best to make this piece phenomenal. I could feel the energy of these people because they played with sounds. However, for me, the craziest and the most brilliant person was a soloist – Dulce Pontes. She was improvising. In the previous pieces she showed her huge talent and that she felt music with her entire heart and body. I was completely enchanted by her voice scale during Abolisson.

It was worth seeing!

It was incredible to see maestro Ennio Morricone in such power and energy. To hear his compositions live, was like making my dreams come true! Standing ovations after each piece and three encores prove that he is a great artist. I was completely touched when I saw a man who is well-known and respected and at the same time so humble and modest. I am grateful that I could take part in this concert.