YOU CAN’T MISS IT!

When I’ve heard about the great Film Music Gala which  which was to take place on place on Saturday, 20th May, I couldn’t remain inert. It was the event which I have been incredibly looking forward to. I decided to take part in it as a volunteer and I really hoped to become a participant of this concert. Till the last days, I had no idea whether I was going to be at this gala. But finally, I was there. The presence of so many talented composers, especially the one who became a faithful friend of the FMF – Diego Navarro, made me come to the rehearsal with a huge smile on my face. How wonderful it was to meet all the known people and had a great musical experience with them. 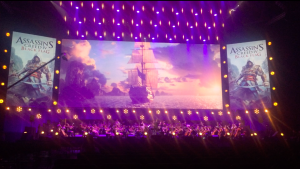 As always, the rehearsal was after the soundcheck. My crew and I sat in front of the scene to listen to some of the pieces at least for a while. Emotions were growing up with every hour and when the rehearsal was over, I threw myself into work and preparations. I need to highlight here that this year my coordinator – Aleksandra and I had a chance to give flowers to the most important two artist of this concert. The first one was Diego Navarro who conducted almost the whole concert, and the second one was Howard Shore – a composer who is widely known to all fans of Tolkien based movies. And that’s how the last minutes before the concert ended – I helped artists with their preparations. 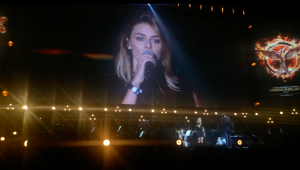 LET’S BEGIN WITH THE GREAT GALA

Suite from „The Lord of the Rings” was the introduction to the concert which highlighted (bez the) uniqueness of this gala. From the very beginning, the Arena audience was enchanted by sounds. If one did not have enough, there was The Imperial March from „Star Wars” composed by John Williams.

This piece was present in our minds far longer than we expected (I will take the liberty to mention that our whole crew was humming its beginning till the very end of the festival, trying to discern the familiar sounds of the march in other pieces).The next song which grabbed my attention was The Hanging Tree by James Newton Howard, sang by Polish singer – Natasza Urbańska. Natasza looked incredible in her dress. Her performance didn’t beat me down, but I saw that the artist did her best. However, it is hard to be surprised – the piece is monotonous and the original is not good. All in all, the Pro Music Mundi Choir added some power to this song. 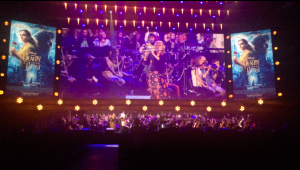 THERE’S THE BEAUTY, BUT NO BEAST

Is it possible for the gala not to have a fairy tale world in the repertoire? I don’t think so and the organizers took care of the audience and they introduced a fairy tale climate of „The Beauty and the Beast”.  A stunning flutist – Sara Andon approached the stage and delighted people with her solo. What’s more, she had a charming dress which could be seen from the other edge of the Arena hall. I had a chance to meet her and I must admit that she’s a very warm and lovely woman who has something special in her, and she attracts people’s attention. 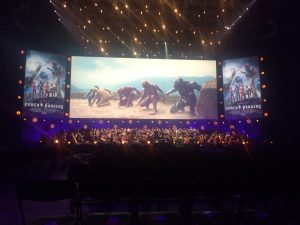 When Diego Navarro left the stage, Brian Tyler replaced him and I could see a huge tension on his face, which was strange because he seemed to be very confident before the concert. Well, could it be stage fright? Could be – because he stood in front of the audience and had to conduct his world premieres. There’s something in his music which attracts my mind. I must admit that he has created his own style – powerful and rock pieces where the film music is still noticeable.  It’s something fresh in this genre. Some kettledrums were enough to recognize Brian’s music.  He’s good at building up tension and I’m a little bit afraid that due to his music I want to see some films which I’ve never thought I could watch, such as „Fast and Furious” or „Power Rangers”. Oh, Mr Brian, you messed with us during this gala! 🙂 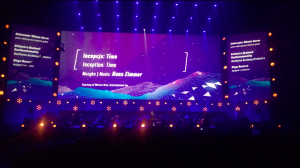 A VOCAL IN INCEPTION? WHY NOT!

After twenty minutes intemission we came back to the hall to relax. I’m sure that the lack of Hans Zimmer was noticeable but I must say that artists coped with it. The guitar solo in Time song was performed by Baron from Afromental band and now I’m not able to imagine this piece without him. However, I was positevely surprised by Joanna Radziszewska’s solo which in Zimmer’s version was jammed by instruments. In this version, the artist had a chance to show all her skills and for the first time I could hear a beautiful vocalization.

Ablel Korzeniowski and Trevor Morris’ pieces enchanted the audience, even though it felt as if we suddenly found ourselves in a completely different space of sounds. Then, Edyta Górniak entered the stage and, wearing a beautiful orange dress, she sang Beyoncé’s song Listen from „Dreamgirls”. Personally, I believe that during rehearsal this performance was better because there wasn’t any stage fright. But, actually, it was a charming show and I think that Edyta Górniak’s voice suits Beyoncé’s songs and she’s able to enchant by means of her technique and voice scale. 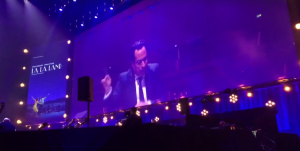 And finally, there was something everybody was waiting for. There was the world premiere of „La La Land” suite by Justin Hurwitz. Unfortunately, I haven’t got a chance to watch this movie but I’m gonna do it as soon as possible. When you see the audience who stamps and claps with the rhythm, you feel that it’s something special and not so often seen in the genre such as film music. Honestly, I also couldn’t help  moving with the rhythm, standing next to the stage. The suite gained more when at the big screen I saw the conductor – Diego Navarro, who is known as an incredibly expressive musician. He had fun during this piece and he made the orchestra flow through the sounds with a unique lightness. Chapeau bas to all artists for this performance! 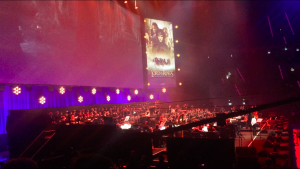 At the end, there were two pieces from „The Lord of the Rings” which were a phenomenal closing frame. Standing ovations were endless and the audience at the very back of the hall highlighted the importance of the Film Music Festival not only in Krakow, not only in Poland but also in the entire world! Artists desire to be here not only because they feel like a big festival family, but they love the audience who admires and understands film music. I’m proud to be a part of this festival and I feel myself kind of a creator of this unique event. My heart was broken when I saw people leaving the Arena hall, but emotions and memories were present all night long.